Manchester's Instituto Cervantes, Società Dante Alighieri and Alliance Française invite you for a 4-day celebration of European Cinema with a focus on women in the industry. These free events include an evening of discussion followed by 3 nights of film screenings. In collaboration with HOME.

PLEASE NOTE: Each evening will take place at the Instituto Cervantes (326-330 Deansgate, Manchester M3 4FN). Please choose the EventBrite registration links accordingly here below to book your place for each evening.

Join us as we discuss roles, specific works by women, and opportunities for women in the European film industry. Focusing on 4 countries (UK, Spain, Italy and France), our panel of experts will address what is unique in how women directors, screenwriters and/or producers approach film-making, and highlight the opportunities for and contributions of women in the industry.  Discussion will be followed by a Q&A. In English - Free - Open to all

Rachel Hayward is Interim Creative Director: Film at HOME, Manchester. She has led the artistic team for ¡Viva! Spanish and Latin American Film Festival since 2009 and is a co-curator of HOME’s Not Just Bollywood film programme. She co-curated the wide-reaching 2019 programme Celebrating Women in Global Cinema, a year-long programme of films and events highlighting and celebrating women in film from across the world.

Carmen Herrero is Principal Lecturer of Hispanic Studies at Manchester Metropolitan University, UK. She leads the research group Film, Languages and Media Education (FLAME) and founded with Isabelle Vanderschelden the Film in Language Teaching Association (FILTA). Her research focuses film and screen studies, in particular their pedagogical applications for language learning and teaching.

Silvana Serra (PhD) has been teaching Italian language and culture, and curating cinema events for the Societa’ Dante Alighieri in Manchester, for many years. She graduated in Italian Literature and Grammar at Università degli Studi Roma III, and was awarded a PhD in Film Studies at Salford University. The doctoral thesis Emotion and Cognition in the Films of Bernardo Bertolucci was published in 2013. She was one of the curators for Un nuovo cinema politico italiano? Vol.1 (2013) and 2 (2014). In Vol.2 she also contributed to the Section “L’Italia tra Storia e Memoria”, writing the Introduction: Il passato sociopolitico italiano nel cinema del nuovo millennio.

“A crackling and offbeat comedy that transforms sadness into shared joy”. Cineuropa

Maud Crayon (Valérie Donzelli), a single mother and struggling architect, wins a competition to redesign the esplanade in front of Notre-Dame. What should be a career-defining opportunity, however, only brings more drama when the project becomes a media scandal. Juggling professional challenges with the complications presented by her ex-fiancé, Bacchus (Pierre Deladonchamps), Maud’s quest to find a sense of balance is easier said than done. Shot just before the shocking fire at Notre-Dame, this light-hearted comedy is also a love letter both to Paris and one of its most famous landmarks.

In French with English subtitles - Free - Open to all

WEDNESDAY 11 MAY: SE QUIEN ERES / I KNOW WHO YOU ARE 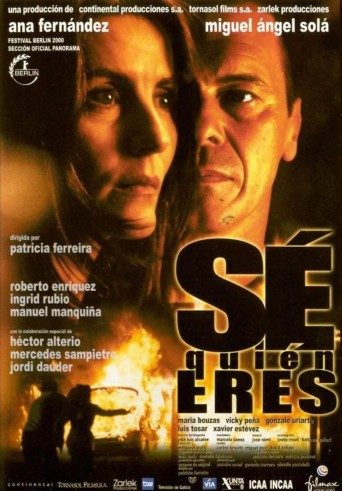 Paloma is a young psychiatrist, hired to work as a director of a clinic in Galicia, and is attracted to Mario, her very first patient. He suffers from a rare form of amnesia, commonly known as Korsakoff's syndrome. As a result, both his short- and long-term memories are affected, and he has temporary lapses of perception. However, Paloma finds Mario to be a fascinating individual, not just a regular patient. Intrigued, she decides to explore Mario's past, and, through their dialogues, their relationship takes an unexpected turn. (Filmaffinity)

In Spanish with English subtitles - Free - Open to all

This film is a journey into the moral awareness of an everyday Neapolitan man - Pasquale Frafuso – ironically nicknamed by local people as Pasqualino Sette Bellezze (seven beauties). In 1930s Fascist Italy, he makes a point of living a carefree life, steering clear of any socio-political discourse. Yet life and history have a different plan for him. So after a funny start, the story takes a dramatic twist, as Pasqualino’s attempt to escape from a mental hospital ends in his imprisonment in a Nazi concentration camp. Here he will be forced to face horrible and impossible choices in order to survive.  For this film, Lina Wertmüller was the first female director to be nominated for the Academy Awards in 1977, together with nominations as best screenplay written directly for the screen; best actor in a leading role (Giancarlo Giannini) and best foreign language film.

In Italian  with English subtitles - Free - Open to all

Unless otherwise indicated, all Alliance Française de Manchester cultural events are open and accessible to everyone. They are public events and under 18s remain the responsibility of their parent/guardian at all times.


Sorry, you've missed the RSVP deadline for this event.